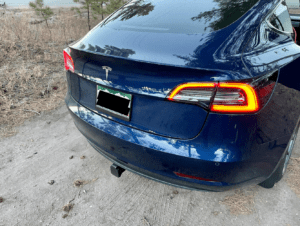 Tesla’s rear lights and headlights now remain on after exiting the vehicle, thanks to software update 2020.48.10. Photo: u/Schmeltz318 on Reddit

Tesla dropped a number of fun Easter eggs in its new 2020.48.10 holiday update, along with a number of other exciting new features.

Among them, one Reddit user noticed that the rear lights and headlights now remain on for up to a minute after exiting the vehicle. This feature was originally available back in 2018 but was removed in a later update by Tesla. But now it’s back.

The feature, as shared by Reddit user u/Schmeltz318 is a welcome change, especially for anyone that frequently uses the trunk or frunk, since it will provide automatic light for a time after parking rather than the owner having to use a separate light or start the car again.

Some users have reported issues with the new update’s navigation, Autopilot, and Full Self-Driving features, despite having paid for the service and having used it in prior updates. In any case, hopefully, a follow-up update will correct the issues swiftly, without a number of owners having to deal with the issue.

Along with the updated lights, the new update also includes more dynamic brake lights, improvements to Autosteer and apparently navigation too, Sentry Mode upgrades, and more. While the differences from 2020.48.5 are minimal, they’re still notable – especially the addition of extra light after exiting the vehicle. After all, it’s the subtleties that make Teslas so well-designed.

Tesla CEO Elon Musk has spoken out in regards to his agreement to buy Twitter on the original terms, after news broke on Tuesday morning. Musk said just now, “Buying Twitter is an accelerant to creating X, the everything app.” When asked if it would be easier to build X from scratch, Musk replied, “Twitter […]
Sarah Lee-Jones
7 hours ago

Tesla has announced it will be removing ultrasonic sensors from its vehicles, the next step of its camera-based Tesla Vision Autopilot. “Today, we are taking the next step in Tesla Vision by removing ultrasonic sensors (USS) from Model 3 and Model Y. We will continue this rollout with Model 3 and Model Y, globally, over […]
Sarah Lee-Jones
9 hours ago

Tesla announced on Tuesday it has hit a milestone of reaching 10,000 Superchargers in Europe. “Tesla owners in Europe now have access to over 10,000 Superchargers, spread over 30 countries,” said the automaker on LinkedIn. “The European network has already grown more in 2022 than any other year, with still 3 months to go,” said […]
Sarah Lee-Jones
11 hours ago