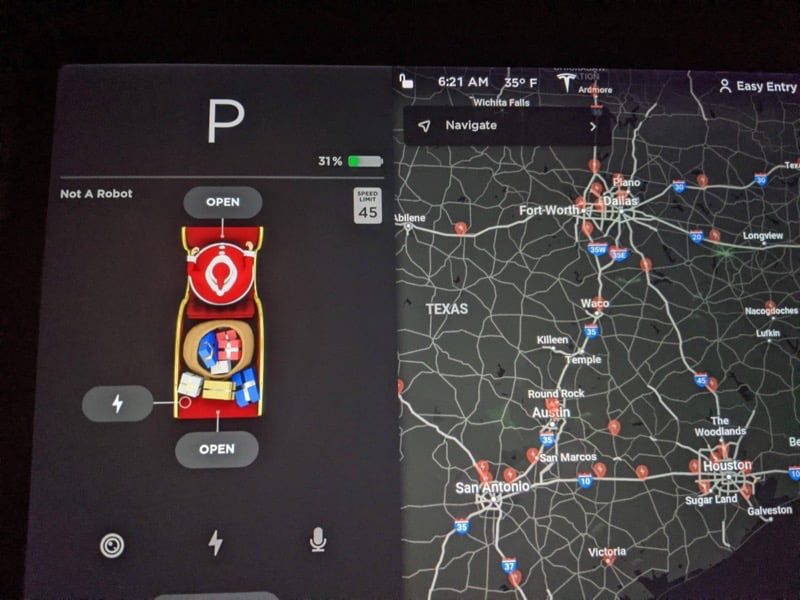 Tesla is known to hide ‘Easter eggs’ within its software, little features that can make you smile when you manage to find and unlock them.

The latest Tesla holiday Easter egg is your vehicle being replaced by Santa in his sleigh, which is available in the recent 2020.48.10 software update, according to an image shared on Reddit. While driving, your vehicle is Santa’s sleigh and other cars are seen as reindeer.

To get the screen above, you need to say “Ho ho ho” or “Ho ho ho not funny” and your Tesla will turn into Santa in his sleigh. You can also activate this ‘Santa Mode’ from the toy box.

Other users chimed in to say in 2020.44, the sleigh would only appear when their Tesla was put into park.

Tesla has hidden numerous Easter eggs within its vehicles over the years, and this latest comes ahead of what CEO Elon Musk teased would be an exciting holiday software update.

Tesla kicked off its 2022 AI Day by showing off a demo of its Optimus robot. The Optimum bot was able to walk out on stage on its own, wave to the crowd and even ‘raise the roof’ to music. Optimus was shown lifting boxes, working in a factory doing some light work and even […]
Sarah Lee-Jones
5 hours ago

Tesla’s big AI Day 2022 is here and it is slated to start at 6:15pm PDT/9:15pm EDT from Palo Alto, California. The event is to recruit engineers to “build the future of AI”. According to the AI Day invite, attendees will “learn about Tesla’s latest developments in artificial intelligence, including Full Self-Driving, Tesla Bot, Dojo […]
Sarah Lee-Jones
14 hours ago

A set of photos shared this week show that Tesla’s Powerwall and Solar Roof are super durable and will continue working after exposure to storms, as noted by one roofing company. @Tesla retweeted photos of a Tesla Solar Roof and Powerwall that withstood winds and rain from Hurricane Ian on Thursday. The photos, originally shared […]
Peter McGuthrie
15 hours ago