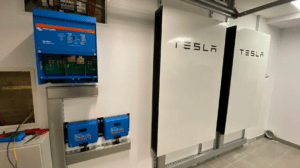 As Tesla continues to grow within the global electric vehicle (EV) market, certain regions will inevitably miss out on certain products. However, inventive Tesla owners will also go an incredibly long way to build their own working hardware, as is the case with one customer from Romania.

Reddit user u/claudiusasu, a Tesla owner from Romania, shared pictures of their own homemade Tesla Powerwall, built custom from Model S modules and with a charging capacity of up to 40 kWh. Because Tesla’s Powerwall is not yet available in Romania, the user decided to craft their own working Powerwall – an impressive build in both resourcefulness and aesthetics.

According to the owner, the entire build cost about $10,000 (USD) – a reasonable price to pay to do the project yourself, especially considering that buying the setup from Tesla can cost as much as $11,500 (USD) in some regions.

Romania currently only has one available 150 kWh Chargepoint throughout the entire country, along with about a dozen 50 kWh Chargepoints. While Romania’s charging infrastructure still has a lot of growth to do before EVs become the norm, you may not need one if you can fashion your own Powerwall at home.

Tesla’s big AI Day 2022 is here and it is slated to start at 6:15pm PDT/9:15pm EDT from Palo Alto, California. The event is to recruit engineers to “build the future of AI”. According to the AI Day invite, attendees will “learn about Tesla’s latest developments in artificial intelligence, including Full Self-Driving, Tesla Bot, Dojo […]
Sarah Lee-Jones
4 hours ago

A set of photos shared this week show that Tesla’s Powerwall and Solar Roof are super durable and will continue working after exposure to storms, as noted by one roofing company. @Tesla retweeted photos of a Tesla Solar Roof and Powerwall that withstood winds and rain from Hurricane Ian on Thursday. The photos, originally shared […]
Peter McGuthrie
5 hours ago

Tesla’s global production of the Model Y and 3 is set for a sharp increase in Q4 with expectations of major growth in 2023, according to internal plans reviewed by Reuters this week. The growth is expected to happen due to Tesla’s Giga Berlin and Texas ramping up production substantially, putting the company on track […]
Peter McGuthrie
6 hours ago