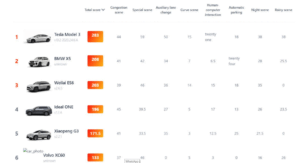 In a new ranking of multiple advanced driver-assistance systems (ADAS) popular in China from 42Mark, the Tesla Model 3’s Full Self-Driving landed first place in a set of criteria that takes multiple situations and environments into account (via @Ray4Tesla; translated). The made-in-China (MIC) Model 3 landed a total score of 283, with the BMW X5, the Weilai ES6, and the Ideal ONE following with scores of 208, 203, and 196, respectively.

The criteria used for the ranking includes congestion, auxiliary lane changes, curves, human-computer engagement, automatic parking, night performance, rain performance, and special cases, each ranked individually for each car. The scores add up to the total, which determines the ranking of the individual ADAS.

While Honda has yet to release any ADAS publicly, and thus is not included on this list, the Japanese company recently gained government approval to use Level 3 autonomous driving in Japan. The above ADAS technologies are all at a Level 2 autonomy, with no other company claiming Level 3 autonomy as of yet.

On Thursday, laser autonomous-driving technology company Luminar is set to go public. While Tesla CEO Elon Musk claims that lidar laser technology isn’t necessary for autonomous driving, it will be interesting to see how the ADAS market changes ADAS rankings in the years to come.