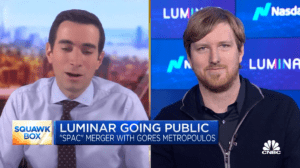 While Tesla has had some major gains this year and in many years past, other auto company adjacents with serious potential are just beginning to enter the market.

Lidar technology company Luminar is going public on Thursday, which is set to make CEO and co-founder Austin Russell one of the world’s youngest billionaires at only 25, as reported by CNBC. The company is already highly-coveted for its technology, and becoming a public special purpose acquisition company (SPAC) will make their company official, with $1.3 billion in already-booked business relationships with major automakers.

Get ready for real autonomy. Hands-off, eyes-off highway driving for cars rolling off the assembly line in 2022 $LAZR pic.twitter.com/1c5U5117fG

While Tesla CEO Elon Musk has shared doubts about lidar technology, Russell claims that Luminar’s technology is more advanced than what other lidar companies are producing.

Russell said, “We have one of the most insane moats of any company at this stage.” He continued, “We’ve built out and pioneered core components … building from the ground up. We have not used commodity parts. We have the largest patent portfolio in sensing systems, more than the top five other lidar R&D efforts combined.”

In response to Musk’s claims that lidar is “freaking stupid,” Russell said, “I think 50 commercial partners and a majority of the major automakers we are working with would disagree. Cameras and other systems are great for assisted driving, but with autonomy, that’s where need really high-performance lidar.”

Musk noted earlier this week he is was “extremely confident” Tesla would release its Full Self-Driving next year to customers. He made the comments while receiving the 2020 Axel Springer Award in Berlin, Germany, while adding he would sleep at the unfinished Giga Berlin that night inside a conference room, instead of a hotel.

Other autonomous car companies such as Waymo are using Lidar technology for its self-driving efforts, but these vehicles are on pre-mapped routes, unlike Tesla’s FSD beta which examines and makes decisions in real-time with cameras.