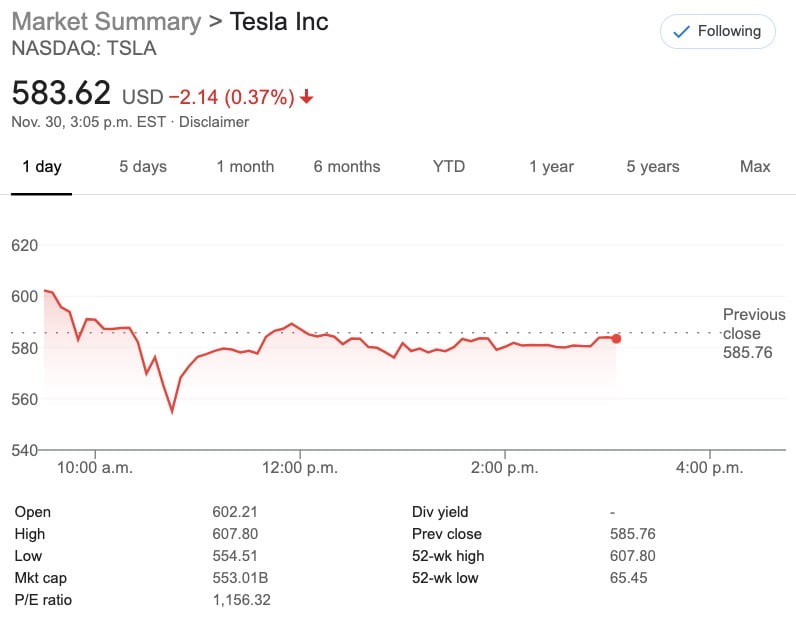 Shares of Tesla touched yet another all-time high, reaching $607.80 per share at open on Monday, hitting a milestone of surpassing $600 per share. The stock then proceeded to dip and currently sits at $581 per share as of writing, down just under a percent for the day.

Tesla is set to join the S&P 500 in December and ahead of the inclusion, the stock has seen a feeding frenzy, rallying since the announcement. Earlier today it was reported China granted Tesla permission to sell its Shanghai-made Model Y SUV, paving way for production to begin imminently.

A 30-foot long, 12,000 lb metal sculpture featuring Elon Musk’s face atop the body of a goat riding a rocket has been spotted on the streets of Austin, Texas (via Fox Business). The statue was commissioned by a group of cryptocurrency enthusiasts who created a project called the “Elon Goat Token.” They wanted the sculpture […]
Nehal Malik
12 hours ago

Tesla CEO Elon Musk said on Saturday that the company has successfully completed its first 500-mile test drive of a Semi truck with a full load. With its haul, Musk noted that the vehicle weighed in at a whopping 81,000 lbs (or 40.5 tons). Tesla team just completed a 500 mile drive with a Tesla […]
Nehal Malik
16 hours ago