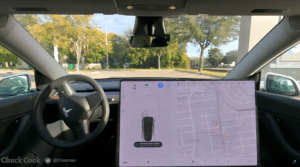 In a video released Thursday, YouTube host and Tesla owner Chuck Cook shares a sample of the newly-released Full Self-Driving (FSD) beta version 5 and Smart Summon. The video shows a moderately-successful Smart Summon, with some problems showing up more regularly than others.

The first couple of tests show the Smart Summon feature making it to the driver, though the vehicle doesn’t seem able to recognize the parking spaces adjacent to the driver. Thus, it simply pulls off to the side a little, while still in the road of a quiet parking lot.

Tesla’s current FSD beta 5 is at Level 2 autonomy, though it’s likely to upgrade in the future once it’s gathered more data and been tested and used more heavily. In any case, its FSD and Smart Summon features are in fair, working order, and it’ll be exciting to see how much they continue to improve with each update.

In conclusion, Cook says he’s not noting any major changes in Smart Summon in FSD beta 5. We’ll have to stay tuned for more as FSD beta 5 videos keep on coming out from early testers.