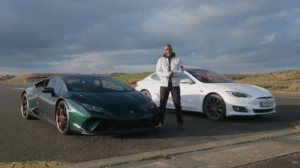 Electric vehicles (EVs) have been beating traditional petrol vehicles left and right this year, and the trend is likely to stop anytime soon. Still, it seems like there must be a match for Tesla and other EVs which are currently dominating the racing space, right?

In a video uploaded Wednesday by YouTube channel Auto Trader, the hosts share a drag race between a Tesla Model S Performance and a Lamborghini Huracan. At the start of the race, the host in the Tesla Model S references the car’s cheetah mode, in which it sits slightly lower to the ground in order to get a better launch into the race.

Off the line, the Tesla Model S quickly outperforms its counterpart, before slowing to let the Lamborghini pass it up for the win. The Lamborghini’s top speed and power win out over the Model S in this race, though it looks pretty slow off the jump in the video, as expected when going up against the instant torque of an electric vehicle.

When Tesla releases the Model S Plaid (0-60 mph in under 2 seconds) and new Roadster (0 to 60 mph in 1.9 seconds), it’ll be unclear how traditional supercars will ever be able to keep up with old gasoline engines. We sure hope the new Roadster will come equipped with barf bags, as one can only handle so much torque off the line.