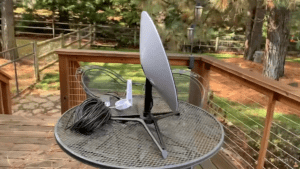 Recent reviews in Canada of SpaceX’s Starlink internet are seeing rave reviews already, though the technology is still in its public beta infancy.

On Saturday, YouTube channel Alshafi uploaded a video depicting SpaceX’s Starlink hardware, including setup, installation, and a few speed tests. The video, shot from the host’s house, also shows the dish moving itself as it searches for the best angle for a signal.

In a series of speed tests between the host’s current internet service provider (ISP) and the Starlink router, the Starlink router landed test speeds of 58 Mbps and, subsequently, 79 Mbps at first, as compared to the original ISP’s speed of 5.2 Mbps – a major improvement for rural Canadian users (you can read more first reviews of Starlink by Canadians here).

In a third test of the Starlink router, the host sees 120 Mbps, a speed likely to be unheard of previously for satellite internet customers. And finally, a fourth test catches an almost-unthinkable 150 Mbps for his location.

Recently, Starlink and SpaceX CEO were approved to test the low-earth orbit satellite ISP on Gulfstream jets, on which it saw speeds up to 600 Mbps. Along with providing rural internet, the service will also someday seek to provide internet for moving vehicles like cars, planes, and boats.

How Elon Musk's Starlink will deliver internet across the globe pic.twitter.com/ZmIr0NCcbc

Now, future customers living in rural locations around the world await their chance to get their hands on a Starlink starter kit – and hopefully, we see that day come sooner, rather than later.

Image credit: u/MRizkBV Last month, SpaceX obtained a license in Qatar to offer its satellite internet service in the Middle Eastern nation, ahead of the current World Cup being hosted in the country. Now, we see SpaceX has debuted an on-street demo of Starlink, operating a trailer showcasing the satellite internet service’s capabilities. You can […]
Sarah Lee-Jones
8 hours ago