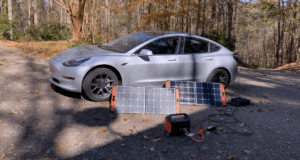 Practicality isn’t always the goal in life – sometimes it’s fun just to shake things up and see what works, even if you may never do it again.

Such is the case with YouTube channel The Tech of Tech’s newest video, released Thursday, which shows that you can, in fact, charge a Tesla with your portable solar rig (via Reddit). The video host walks viewers through his process of setting up and using his solar charging rig to charge the Model 3, breaking down the steps necessary to do so.

The host notes that he had seen others attempt to do the same, though they failed because they did not manually change the charge current to a setting below the amp rating. Once he does this, he moves on to begin setting up the hardware needed for the project.

In spite of the fact that it can be done, the solar rig took an hour and 38 minutes to charge the Model 3 with just an extra 3 miles of range. At this rate, it would take days to fully charge up the EV, and it would hardly be worth the time.

If you’re going camping for example, and you have extra time, this may be worth it to keep your Tesla juiced up with some miles. But yet, chalk this up as an accessory for a zombie apocalypse…

Still, it does pose an exciting possibility – that future technology may improve charging efficiency to the extent that one could someday charge their Tesla with solar energy on the go, while having it also be practical for use.

Tesla has increased delivery wait times for all models except the entry-level Model Y in China to 4-8 weeks — reports CnEVPost. The move is in stark contrast with delivery timeline changes made by Tesla in recent weeks, which cut wait times down significantly. For some models, Tesla managed to bring delivery times down to […]
Nehal Malik
11 hours ago

If you’re planning to finance your next Tesla purchase in the United States, rates have increased to kick off the fourth quarter. As noted by Waiting4Tesla.com (@w4tsla), financing rates for Model S/X and Model 3/Y on the Tesla website in the U.S. have increased 0.25%, now showing as 4.74% (previously 4.49%). Tesla partners with major […]
Sarah Lee-Jones
15 hours ago