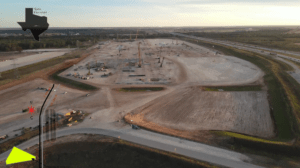 In a new video uploaded by Randy of YouTube channel Terafactory Texas, drone footage shows the construction site of Tesla’s new factory-to-be, along with the addition of a number of concrete columns to the site’s south side in preparation for completing the foundation of the building.

While a number of other new procedures are happening on the construction site, the most notable is the number of new columns – many of which have not yet been added to the ground and are still sitting in the back of a truck. Still, the update is exciting, and likely means we’ll see the first building begin to go up sooner, rather than later.

In the video’s description, Randy shared his predictions for what the new columns might mean – and if he’s right, we’ll likely see the result within the week.

Randy wrote, “I think we’ll see 2 matching columns go up on the opposite side near the crane by the power lines tomorrow and one more in the middle. If this holds true, we can really start to see how wide this part of the factory will be as it’s likely that these columns could run the length of the entire factory, which is the case in many sections of Giga Berlin.” He continued, “The ‘t’ shaped column that was placed first is most likely a center or interior column. Moving away from the columns, we can see that concrete is being poured in the formwork on the north end of the isolation foundation and it looks like rebar and vapor barrier installation is taking place in additional areas of the large pit.”

Tesla Terafactory will someday even build its own 4680 cells in a move towards self-sufficiency. When that day comes, likely many years from now, the cost of EVs will likely drop significantly, and we’ll see about as many EVs on the road as we will traditional gas cars.

The Witcher Might Be Coming to Your Tesla Teases Elon Musk