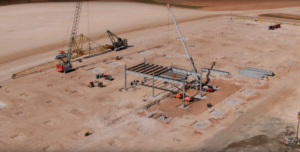 Tesla’s construction in both Austin and Berlin have been making leaps and bounds in progress recently. And fans and followers of the electric vehicle (EV) company, have kept in step, awaiting the day they’ll see the Cybertruck materialize before their eyes.

In Jeff Roberts’ newest 4K video update of Tesla’s Austin Gigafactory, we see the beginning of the construction of what appears to be a “double gazebo,” as noted by Roberts himself. The structure may well be an important building structure to go up on the construction site’s large plot of land, an exciting step forward in progress.

In recent coverage from Jeff’s drone, we could see the placeholder for this structure’s foundation, and it was noted that a successful test of the foundation would result in the beginning of dry-in procedures. With this double gazebo, it appears that Tesla’s Austin construction site is inching closer to dry-in status, most likely set to happen before the end of the year.

Along with the structure, the Tesla Giga Austin update includes more foundational work on the site, as well as more updates to the factory’s main operation building.

Gigafactory Austin is set to be completed in May 2021, with Tesla’s Cybertrucks set to begin production and deliver in the latter half of the year, if there are no other delays.