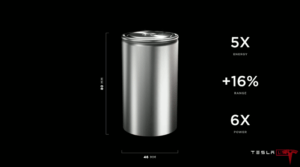 Tesla’s global influence shouldn’t be surprising. However, the electric vehicle (EV) giant has had a major impact on whole industries in the past, and now it’s being evaluated for its role in mining a metal which is common throughout the world.

At its Battery Day event on Tuesday, Tesla (TSLA) announced it would work towards mining more lithium for its batteries – a move that Morgan Stanley says could weigh in on global lithium prices, as reported by S&P Global.

Between a new tab-less battery cell technology, upgraded and cleaner lithium mining practices, and a $25,000 Tesla within the next few years, along with a new Model S Plaid announcement, Tesla really covered its bases on Battery Day.

Morgan Stanley analysts told reporters, “Tesla announced improvements to battery technologies that are likely to support EV sales in the longer term, but also to reduce lithium usage and production costs.” They continued, “They also announced their own lithium mine with a new, lower-cost and more sustainable process. Lithium stocks [likely] to react negatively.”

While new technologies in lithium mining are the driving force for Tesla’s new, cost-effective procedures for mining lithium. However, it’s not unlikely that the choice to use lithium at ever-increasing volumes is not likely to bode well for the lithium industry or for metals in general.

Tesla announced on Wednesday it has added a new member to its Board of Directors—Airbnb co-founder Joe Gebbia. This was made effective on September 25, 2022. The electric automaker shared a bio of Gebbia on its website today as part of the announcement: Gebbia, a designer and entrepreneur, has spent the last 14 years of […]
Sarah Lee-Jones
7 hours ago

With Tesla’s regular software updates come gradual improvements, and one new version builds off of the automaker’s recently improved navigation system in its vehicles. Tesla added suggested destinations in its software update version 2022.28.2, as detailed in a report on Wednesday from Not a Tesla App. In the report, the publication notes a user named […]
Peter McGuthrie
17 hours ago

As Tesla continues with plans to open its Superchargers to non-Tesla vehicles, the automaker plans to shift its charging rates and times at certain locations. Tesla is updating its charging rates at select Supercharger locations starting on Wednesday, September 28, according to tweet spotted by @Whole Mars Blog. In the screenshot, Tesla says that users […]
Peter McGuthrie
17 hours ago