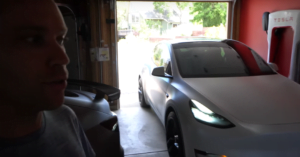 Due to the quiet nature of electric vehicles (EVs), they’re also supposed to have a “pedestrian noisemaker,” according to some local laws, to alert pedestrians as to their presence.

In a video uploaded by automotive YouTube channel DÆrik, the hosts discuss and install Tesla’s noisemaker into a Tesla Model Y, which does not include the latter. They also talk about their experience doing the same in a Tesla Model 3.

The hosts of the show purchased the pedestrian warning speaker from Tesla, to be installed into the Model Y.

By September 2020, 100% of EVs produced have to have a pedestrian noisemaker of some sort. For those with older model Teslas that want to install the noisemaker, it is possible to buy the part directly from Tesla and install it yourself, as the video depicts.

Tesla CEO Elon Musk has shared that the noisemaker sounds will be customizable in the future, although they currently are not.

Ultimately, the hosts in the video are able to get the part to work after a double scroll wheel reset, proving that installing this part into previous Tesla models is doable for those who want to add the pedestrian noisemaker feature. And for those buying new EVs, every electric car produced this month and on will be required to have some sort of noisemaker.