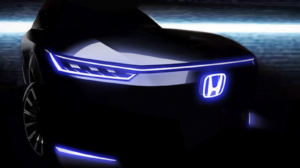 As the world inches towards the goal of sustainable transportation, it feels like new electric vehicles (EVs) are announced fairly frequently. Or maybe that’s just this particular September.

In either case, Honda has just shared a teaser of a concept car to be sold in China, as reported by Yahoo Finance. Like the company’s first EV, the Honda e, there’s no specific timeline or details surrounding a future release. The next car also isn’t likely to be available in the US, but rather, it should be available across Asia and Europe.

The images depict a sleek, dark Honda sedan, accented with neon lights. The photos were first shared on the company’s website, as a preview to the Beijing Motor Show, and they’re admittedly pretty cool. The images don’t show much, and they may or may not come to fruition, but they’re certainly worth a look.

Honda has said that the concepts are indicative of “the direction of the future mass-production model of the Honda brand’s first EV to be introduced in China.”

The company has also said it plans to offer a CR-V PHEV to the Chinese EV market at some point in the future.

The Beijing Motor Show is set for September 26, and more EV announcements are expected from Honda at the event.

56 Tesla Superchargers in Firebaugh, California Underway, Along with Restaurant and More