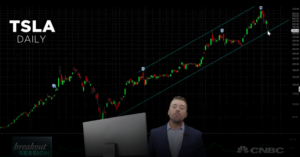 In spite of the fact that Tesla (TSLA) is down 30% over the past week, one analyst believes it doesn’t threaten the stock’s long-term strength.

Todd Gordon, managing director of Ascent Wealth Partners, has stated that he thinks Tesla is still in the game regardless of its recent downturns, as reported by CNBC.

On CNBC‘s segment “Trading Nation” on Tuesday, Gordon told the host, “The main difference between how bulls and bears view Tesla is whether they value it as a traditional auto company or a technology company. If you’re trying to assign valuation on Tesla based on the conventional automobile industry, of course, the stock is going to look expensive” He continued, “We don’t see Tesla as an auto company but more as a ‘technology on wheels’ kind of company.”

Gordon has been consistent in his Bear case for Tesla, a difficult feat as every other analyst raises targets repeatedly.

I disagree with his price target of course as well as some of his argument, but his case is worth listening to and directionally he is likely correct. https://t.co/JKvfOc3ioH

Tesla’s value has been of particular debate between bulls and bears, though Gordon also said that the key to success for Tesla will be its demand within the Chinese market. Alongside competition from new EV makers Nio and Nikola, Tesla is still the only brand lineup to hit the road as of yet, so its momentum is expected to keep the company afloat, even when competing companies finally begin delivering cars.

Tesla on Friday held its annual AI Day event to showcase the company’s latest leaps in Artificial Intelligence, automation, and computation. The event kicked off with Tesla showing off the first working prototype of of ‘Optimus,’ the long-awaited Tesla Bot. Despite merely being a prototype, Optimus was able to walk out on stage, wave to […]
Nehal Malik
21 mins ago