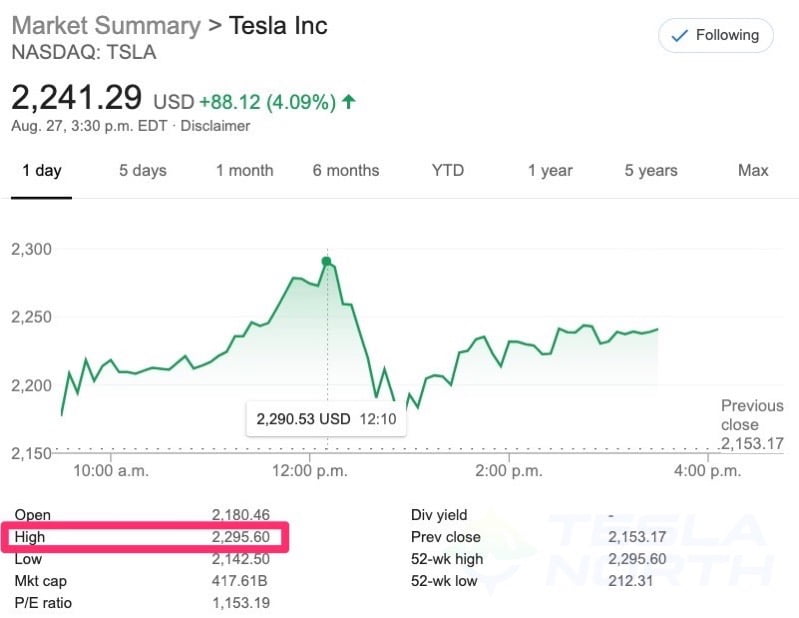 Tesla’s stock price just keeps surging, as today during intra-day trading, it reached another all-time high of $2,295.60 per share.

Just yesterday, shares of Tesla hit an all-time high of $2,166 per share, but that was topped today. Numerous analysts have raised price targets for Tesla, including Wedbush noting earlier this week the company’s stock should be at $3,500.

Tesla’s market cap has also hit a record, reaching $417 billion. The company’s stock is set to split 5-for-1 on August 28, 2020 and trade on a split-adjusted basis at the end of the month.

With Tesla’s annual shareholders meeting and highly anticipated Battery Day set for September 22, many expect the stock to keep rising once we hear more about the company’s newest battery technology.

Although Tesla currently remains the top electric vehicle (EV) manufacturer in the U.S., a new study shows that increasing competition is slowly chipping away at the company’s market share. Tesla has a 65 percent EV market share in the U.S. in the first nine months of 2022, which is down from 79 percent in 2020, […]
Peter McGuthrie
23 hours ago

As Tesla heads into the final month of the year, the automaker is looking to boost customer orders with a new discount option for its flagship sedan and SUV models. Tesla is offering a $3,750 discount on Model 3 and Model Y orders in North America, as seen in a text message sent from the […]
Peter McGuthrie
23 hours ago