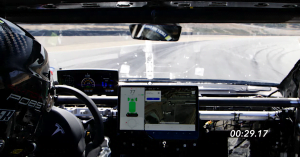 While it is becoming a little redundant to say that Teslas are faster than most conventional cars, and electric vehicles (EVs) too, it still isn’t really getting old. In fact, it’s still quite new to the world, and many EV enthusiasts are chomping at the bit to hear this more often.

On Sunday, the automotive YouTube channel Unplugged Performance shared a new video driving a Tesla Performance Model 3 at the Laguna Seca track. In the video, the Model 3 and driver Randy Pobst break the EV lap record, besting the Plaid Model S record by a close .76 seconds.

The following day, Unplugged Performance member Oscar Jackson Jr. also posted a record-breaking time with the Model 3, at another .35 seconds faster than the prior record set by Pobst.

The Model 3 is awesome and when Randy did Laguna Seca, he beat the Plaid Model S time! Just imagine if they can lighten up those batteries and still get the same power, it would beat all the open wheel times too!

Pobst was also the recent qualifying leader of the Pikes Peak lower section, another race with over-the-top Tesla representation. The Pikes Peak race also included three Tesla Performance Model 3s, one of which was driven by Pobst.

The Model 3 used by Pobst this time was the “street car” package designed around the Tesla Model 3 by Unplugged Performance. Over the weekend, the car drew a lot of bystander attention, likely due to its impressive track numbers.

In the coming years, our favorite racing EVs will only continue to improve, and the age of the motor vehicle winning races will soon come to a close.

Tesla delivered 2,177 Model 3 vehicles in Canada last month, out of 6,956 battery electric and plug-in hybrid vehicles in the country for August 2022. According to Transport Canada data, Automotive News Canada reports Tesla was the biggest volume brand under the federal EV rebate program, which offers $5,000 CAD for eligible vehicles. The iZEV […]
Sarah Lee-Jones
5 days ago