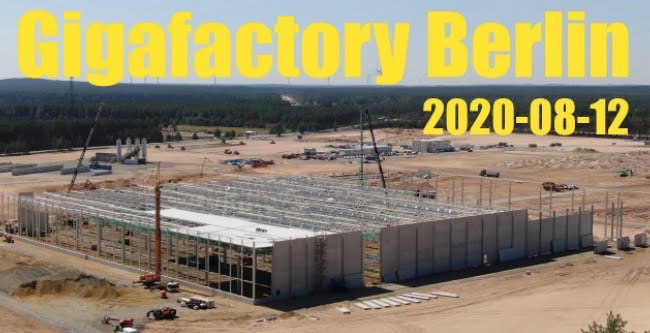 Tesla’s Gigafactory Berlin continues to get built at a rapid pace, showcasing the efficiency of German engineerings and work output.

Tobias Lindh shares a time-lapse of Giga Berlin from August 12, 2020, while a second video from G4Tesla also shows a similar timelapse from the same date.

The videos show the drive unit building gets more walls built, while the roof starts to get covered. As for the other buildings, more reinforced concrete beams and steel skeleton beams for an upcoming roof are set. It’s hard to imagine the massive scale of the Gigafactory until you see just how small humans are outside the upcoming buildings.

Tesla CEO Elon Musk said back in July, “Giga Berlin will come together at an impossible-seeming speed. The prefabricated construction method in Germany is extremely impressive.”

Tesla is planning to add a new showroom and service center in Northern Netanya, Israel, according to a property lease signed by the automaker, reports Globes. The site is located at 39-41 Hakadar Street in Netanya, complete with a nearby store from Chinese automaker Geely Geometry. The property includes about 3,300 square meters (10,826.77 square […]
Peter McGuthrie
12 hours ago

Thailand has been one significant expansion project from Tesla in recent months, and now the automaker is launching some of its first fast-charging stations and a new retail store in the country. Tesla is preparing to launch the first V3 Supercharger station in Thailand, located on the B1 floor of the CentralWorld shopping complex in […]
Peter McGuthrie
13 hours ago

The Motortrend crew recently visited Frito-Lay’s upgraded, zero-emission distribution center in Modesto, California to talk with Tesla Semi drivers and see the truck in person. The publication was able to gather a few extra specs on the Tesla Semi, noting that the huge vehicle sported a Model S Plaid tri-motor powertrain but turned around the […]
Peter McGuthrie
14 hours ago