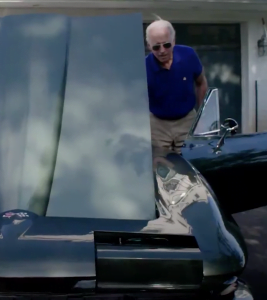 As election season rolls around, electric vehicles (EVs) are just one of the many complex topics facing our modern world. But on a lighthearted note, even our politicians are celebrating the impressive feats of electric cars.

In a recent campaign video posted to Twitter, former Vice President and presidential candidate Joe Biden referred to an all-electric Chevy Corvette being on its way, as announced by Green Car Reports.

There's been a lot of talk about my vetting process lately. Here’s an inside look: pic.twitter.com/tFRKJOE3hi

While nothing of this sort exists on the market today, Biden seems optimistic that the US can dominate the future of the EV industry, and that one may exist in the near future. Rumors about an electric Corvette have circulated for years, though GM has yet to announce anything about a Corvette. The company has mentioned that there will be 12 new EV models in the near future.

As it turns out, the Corvette in the video is simply an aftermarket version of a C7, crafted by the custom car company Genovation.

In a move to support the growing EV industry and distance himself from the GOP’s recent repeal on the EV tax credit, Biden has made many mentions in his campaign about environmental protections, though he has yet to specifically mention EVs. Oddly, Trump has even backpedaled and been supportive of Musk and Tesla, especially due to their controversial decision-making regarding reopening during COVID-19.

Whatever the case may be, it’s not long before EVs are backed by the mainstream, and we can get used to politicians like Biden talking about them at large.