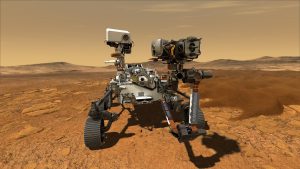 As if helping with Crew Dragon launches wasn’t enough, NASA has officially announced they will be launching ‘Perseverance’ on July 30, at 4:50 PDT (also less than an hour from now). This car-sized robot is heading to Mars and will spend years exploring the crater Jezero, which used to be a lake billions of years ago.

Perseverance is also known as ‘Mars 2020’, with an estimated worth of $2.7 billion. Perseverance can collect up to forty-three sample tubes from Mars and is supposed to bring back at least twenty, which will then be analyzed for past signs of life. As reported by Space.com, the robot will be powered by a Multi-Mission Radioisotope Thermoelectric Generator.

This is definitely no easy task. Once Perseverance lands on Mars, it will be completely on its own and have to rely on programming. This mission is also related to NASA’s Moon to Mars plan.

LIVE NOW: Are you watching? Less than an hour until liftoff to Mars, to search for signs of ancient life. #CountdownToMarshttps://t.co/eraBcGbgd4

Trained biologist and NASA Astronaut Zena Cardman made a statement:

“I think this is the most exciting time in space exploration. The fact that we’re sending a rover to Mars while we talk about sending humans to the moon is incredible.”

Perseverance will be launched in an Atlas V rocket, which will be in its 541 configuration. According to the weather forecast, the conditions are 80% favorable and should be just fine for the launch.

This launch can be watched live here. The footage is going to span over a two-hour window, and will start streaming a while very soon. If this mission is successful, it will be absolutely revolutionary for all space-related endeavors.