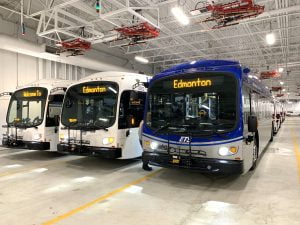 Up to 1,000 diesel buses are currently providing public transport around Edmonton, with over 87 million rides taking place in a year. The city is looking to cut greenhouse gas emissions in half by 2030.

Edmonton Transit Services announced in their latest press release that there would be “19 more Proterra buses on the way this year”. The city is looking to build up a fleet of forty Proterra Catalyst E2 660 kWh buses, for convenient and clean transportation around Edmonton.

On YouTube, ‘City of Edmonton’ posted a teaser video for their upcoming electric buses a few days ago.

As the electric vehicle (EV) industry grows, Edmonton seems to be making history by purchasing one of the largest number of electric buses in Canada. Mayor Don Iveson publicly advocated for these electric buses.

“Electric buses are a major component of the future of public transit in our city and across Canada, because they save the City money and benefit not only transit users who will get to experience the perks of a quieter commute with decreased emissions, but also Edmontonians who aren’t regular commuters on our transit system, as they’ll also benefit from the city meeting its energy and climate goals.”

All the buses are equipped with a Proterra APEX Intelligence System, which will help record distance traveled, charger status and more data. This is just a step towards completely revolutionizing public transport as we know it.

Electric vehicles (EVs) are inching their way into the mainstream, and new approval from the federal government for upcoming charging stations is expected to expand the charging network significantly. The U.S. Transportation Department (USDOT) announced the approval of EV charging station infrastructure plans for all 50 states, Washington D.C. and Puerto Rico on Tuesday, reports […]
Peter McGuthrie
20 hours ago

Electric vehicles (EV) are becoming popular rental cars through Hertz following partnerships announced last year, and another joint goal will see the advancement of charging stations in the U.S. Hertz announced a partnership with British Petroleum (bp) on a national network of EV charging stations, as detailed in a press release on Tuesday from the […]
Peter McGuthrie
23 hours ago