Next Tom Cruise Film to be Shot in Space Aboard SpaceX Crew Dragon: Report 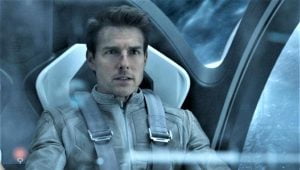 All the way back in May, there were plans for Tom Cruise to star in the first-ever film shot in space. It seems like this project is really coming to life, with Universal Pictures already negotiating and planning the film.

Tom Cruise will fly onboard SpaceX’s Crew Dragon to the International Space Station (ISS). The company will be working closely with NASA as well. Elon Musk himself seemed enthusiastic about the ambitious project on Twitter, replying to a tweet from Tesmanian.com store co-founder, Vincent (use code TESLANORTH10 to save 10% off site wide), saying “Could be great!”:

Things should become clearer sometime after Crew Dragon returns on August 2nd. The space film will have a budget of $200 million, with Tom Cruise receiving anywhere from $30 to $60 million as reported by Variety. Doug Liman is to direct this film, having already worked with Cruise in ‘Edge of Tomorrow’ and ‘American Made’. There is allegedly no script written for the film yet.

We don’t know when production will begin, but it will be after Tom Cruise finishes filming the next two ‘Mission Impossible’ movies. With Cruise being a talented actor and stuntman, there’s no denying that this film will be action-packed and out of this world.

Top Gun: Maverick, the sequel to Cruise’s iconic film Top Gun, is now being pushed to July 2, 2021, as COVID-19 cases spike in the U.S. The film was already delayed from the summer of 2020 to December, but fans will have to wait six more months to see the highly anticipated sequel.

In early November, SpaceX announced a new Fair Use policy for its Residential customers in the US and Canada, along with all Business and Maritime customers. The new policy was set to begin in December 2022, but now SpaceX has delayed the policy, according to an update on its website. The plan would offer up […]
Sarah Lee-Jones
15 hours ago

The Federal Communications Commission (FCC) approved SpaceX to launch up to 7,500 next-generation Starlink satellites on Thursday, according to a report from CNBC. “Our action will allow SpaceX to begin deployment of Gen 2 Starlink,” said the FCC. The approval is only for part of SpaceX’s application for Starlink next-gen satellites. The company wanted 10,800 […]
Peter McGuthrie
19 hours ago