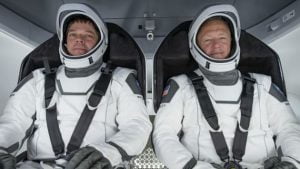 SpaceX and Nasa worked closely together to plan their joint Crew Dragon Demo-2 launch. On May 30th, Doug Hurley and Robert Behnken were sent to the International Space Station (ISS). CNBC reports that SpaceX’s Crew Dragon is set to return to Earth on August 2nd. Once the crew touches down in the Atlantic Ocean, this will have been the first time SpaceX has sent out astronauts. Hurley and Behnken will have spent approximately two months in space.

Back on July 2nd, SpaceX announced that Crew Dragon officially docked to the ISS. According to NASA, they are expected to depart from the space station on August 1st around 5PM PDT.

This is still only considered a test flight. After roughly six weeks of looking into the flight, there are plans to send out four astronauts as Crew-1 in Mid-September. Roundtrip flights will be regularly sent out after Demo-2’s successful landing. SpaceX claims that private citizens can be sent to space by 2022. If everything goes well, Tom Cruise could be shooting his space movie in no time!

The Federal Communications Commission (FCC) approved SpaceX to launch up to 7,500 next-generation Starlink satellites on Thursday, according to a report from CNBC. “Our action will allow SpaceX to begin deployment of Gen 2 Starlink,” said the FCC. The approval is only for part of SpaceX’s application for Starlink next-gen satellites. The company wanted 10,800 […]
Peter McGuthrie
24 hours ago