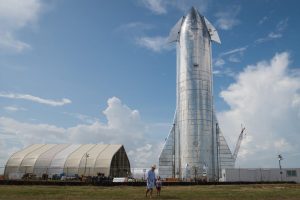 SpaceX was originally founded in 2002 by Elon Musk with the goal of colonizing Mars one day. Since 2012, the company has been working on Starship SN (Serial Number) prototypes to fly out to the planet. It’s safe to say that a lot of hard work has gone into this developmental project.

When asked about the status of Starship SN5, Elon Musk hopefully responded that they would “attempt to fly later this week”.

Will attempt to fly later this week

Safety measures like roadblocks will be implemented. As reported by CNET, Starship SN5 is only expected to fly for 150 meters as a trial ‘hop’. We can assume that the procedure will be similar to how ‘Starhopper’ was handled. The biggest difference is that SN5 is a much larger vessel “capable of an orbital flight”.

Other SN Starship models were tested before, all of which were destroyed or just struggled to get off the ground. SpaceX made history by being the first private company to ever send a spacecraft to the International Space Station (ISS). If Starship SN5’s flight is successful, then the company is definitely on course to use Starship models for commercial payloads by next year.