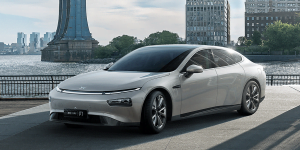 Tesla’s Chinese Rival Xpeng Motors started rolling out their P7 Sedan models earlier this month. CNBC reports that they recently raised up to $500 million in funding with investors like Aspex and Coatue. Xpeng Motors had also received $400 million from Xiaomi last year in November.

On July 11, Xpeng Motors posted a Tweet about their event for testing the new Sedan model. Replying to another user, the company stated they also have plans to do a “test drive in Europe soon”.

After the EV Industry in China took a big hit from the pandemic, this cash injection could be just what the company needs. With sales dropping by over 33% the country has focused on this automotive market more. Tesla began producing Model 3 vehicles in Giga Shanghai this year. The new P7 Sedan is competition for Tesla in the Chinese market, being sold for a starting price of roughly $30,000 USD, undercutting the Model 3 which starts at about $39,000 USD in the country.