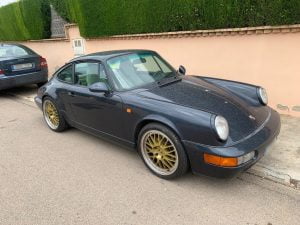 In Spain, a Tesla Model 3 has helped in finding a stolen Porsche 911, reported by autoblog. The Model 3 recorded thieves stealing the classic Porsche 964 911 Carrera 2, by breaking into it and rolling it out quietly whilst it was in neutral. After this, the owner of the Model 3 gave the owner of the 911 the footage of the thieves, which was posted on twitter.

The 911 was found just outside Valencia after someone had seen it there and reported it to the police. The whole operation took less than 24 hours and if it wasn’t for the Tesla, the owner of the 911 would not have got his beloved car back.

The Tesla was parked up and had Sentry mode activated, which records any potential threats close to the car whilst it’s on standby. This is so it can protect itself against theft and provide evidence within cases such as vandalism or accidents.

However, it seems Sentry mode has become very useful in stopping other crimes or helping them out. Earlier this month, a Tesla parked in sentry mode helped solve an unsolved murder in Norway.

A revamped Model 3 is under development at Tesla, according to four people familiar with the plans in a report from Reuters on Monday. The updated model, dubbed “Highland,” is expected to decrease overall complexity and reduce the number of components in the Model 3’s interior. Additionally, the new Model 3 will focus on factors […]
Peter McGuthrie
7 hours ago

Tesla is ‘recalling’ roughly 80,000 vehicles in China due to seatbelt and software issues, according to the State Administration for Market Regulation in a statement on Friday (via The Wall Street Journal). The regulator said that a recall filing had been for Tesla’s vehicles, which is currently the second largest automaker in the country. The […]
Peter McGuthrie
3 days ago