Tesla’s Model S Long Range Plus now has an EPA range of 402 miles (647 kilometres), setting a new standard for how far an electric vehicle can travel on one charge.

The company made the announcement earlier this evening on its company blog:

Starting today, all North American Model S Long Range Plus vehicles have an official EPA-rated range of 402 miles, representing a nearly 20% increase in range when compared to a 2019 Model S 100D with the same battery pack design.

Tesla says this “significant achievement reflects Tesla’s obsession with efficiency and energy frugality, and is realized through several changes, both iterative and transformational, in core hardware and system architecture development by the Tesla engineering, design and production teams.”

The new range was made possible from significant mass reduction in both seats, battery pack and drive units, learning from Model 3 and Model Y production.

Tesla also says their newest 8.5 inch-wide aero wheels now lower aerodynamic drag compared to the former wheels on Model S, and together with a new custom tire, there’s a 2% improvement to range. 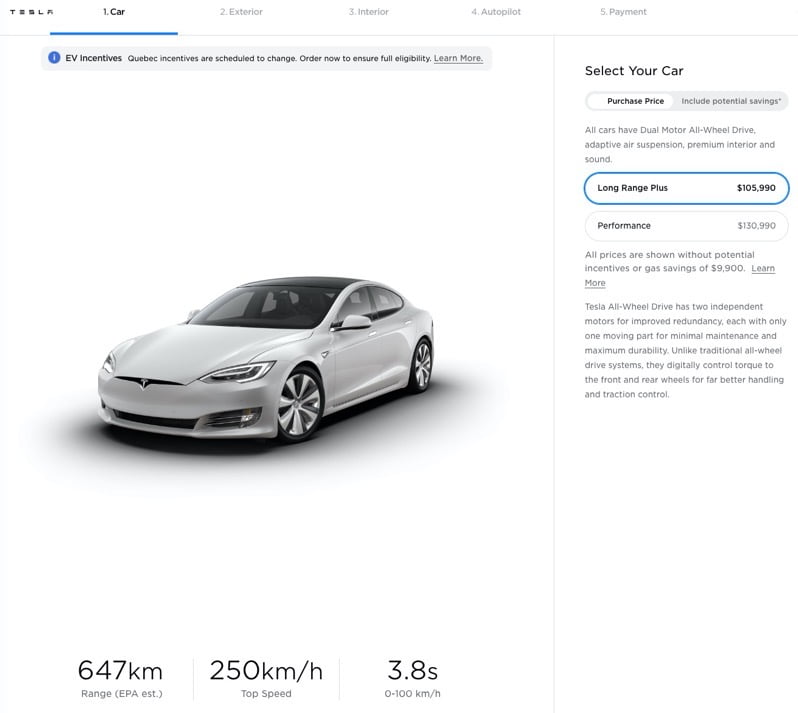 The company explained other changes in detail noting they “replaced the mechanical oil pump with an electric oil pump that optimizes lubrication independent of vehicle speed to reduce friction.” Tesla adds, “further improvements to the gearbox in our front permanent magnet synchronous reluctance motors shared with Model 3 and Model Y have resulted in a further increase of 2% more range while driving on the highway.”

Tesla says “regenerative braking now works at a lower speed and deceleration rate, sending more energy back to the battery pack while simultaneously enabling a driving experience like no other car,” in its latest drive feature called HOLD.

As for the Tesla Supercharging network, there are now over 17,000 Superchargers around the globe, with much faster V3 now available on three continents.

“Tesla owners can travel incredible distances – from the Everglades to Vancouver, the Arctic Circle of Norway to southern Portugal, Hong Kong to Harbin, China – all for a fraction of the cost of gasoline,” said the company.

The company also reiterated a recent $5,000 USD price drop to Model S Long Range Plus, adding to an even better reason for people to buy a Tesla, to go with over-the-air software updates.