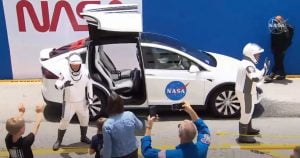 In a monumental undertaking, SpaceX and NASA joined forces to send two astronauts into orbit. While public hype and attention mounted earlier this week, the initial launch was postponed due to weather. However, the ceremonies and preparation leading up to the launch remained. After all, the call to postpone the launch was made only minutes prior to the slated launch time. Now, in a new video from CNET Highlights, viewers get a closer look as two NASA astronauts ride in a custom Tesla Model X to the launch pad at the launch pad.

The NASA astronauts Robert Behnken and Douglas Hurley prepared for launch by soaking up their final moments grounded. They took the chance to greet onlookers, fans, and audience members before situating into the back seat of the Tesla Model X. A one of a kind NASA decal makes this version of the Model X stand out from the rest. The video shows them savoring the final moments with their family members, saying their farewells before launching into space.

The initial launch date has been postponed to Saturday, May 30, 2020. Weather forecasters and space exploration officials have been keeping a close eye on weather patterns for the launch. Sources at CNN report that there’s still some uncertainty about the Saturday launch. “As of Friday morning, the 45th Space Wing, an arm of the US military that oversees all East Coat rocket launches, predicts about a 50% chance of the weather holding up enough for launch on Saturday. And the odds are slightly better — about a 60% chance — for the next opportunity for liftoff on Sunday, May 31, at 3:00 p.m. ET.”