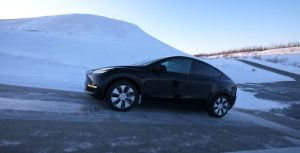 image via Jerry Rig Everything

The Tesla Model Y has received widespread attention since its North American launch back in March 2020. As a result, car review sources, electric vehicle magazines, and avid YouTube review channels have come up with a plethora of interesting performance tests. Now, in a new YouTube video by Jerry Rig Everything, viewers get an insight into a rare case for the Tesla Model Y. How well does the newest electric vehicle from Tesla perform in off-road arctic conditions?

As seen in the past, the Tesla Model Y brings some new features to the table that dramatically improve its cold weather performance. Perhaps the most notable improvement, the heat pump, has received praise from drivers and Tesla enthusiasts of all kinds. Using an environment that sits at -21 degrees Fahrenheit or -29 degrees Celsius, the Model Y has its work cut out.

The video begins by using a unique test environment. An uphill track provides two separate lanes. On one side, two tires drive up cold pavement. However, on the other side, two tires drive uphill on a slick patch of ice. A brief stop in the middle of the hill showcases the Model Y’s adaptation. As the car begins to move again, the tires spin. However, after a moment of adjustment, the vehicle then transfers the torque to the rest of the tires in order to move up the hill.

A Comparison of the Tesla Cybertruck and Other Popular Trucks [VIDEO]