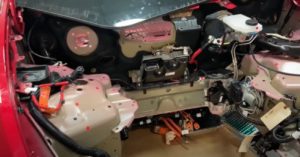 Experienced Tesla owners and new drivers alike continue to explore the features of the Tesla Model Y. In another breakdown video from Munro Live, viewers get some comprehensive insights on the center-mounted PDC, 12V power, and version three of the ADAS hardware.

As you may (or may not) know, the acronym PDC stands for power distribution center. On the Tesla Model Y, the PDC offers some unique features. First and foremost, it’s different in that it’s been mounted in the center of the vehicle. Because the Model Y has no fuses or fuse box, the PDC’s been mounted in the center in order to reduce the amount of heavy wiring. Furthermore, the location of the PDC allows for smoother and quicker builds by Tesla engineers. These types of subtle improvements allow Tesla to keep pace with the orders they’re receiving for the Model Y.

The ADAS Hardware V3 in the Model Y gets some attention as well. ADAS stands for Advanced Driving Assistant System. Some in-depth analysis of the hardware looks at the function of its coolant, its connection to the vehicle’s radiator, and its role in assisting the advanced driving assistant.

What Is It Like to Drive the Tesla Model Y? [VIDEO]