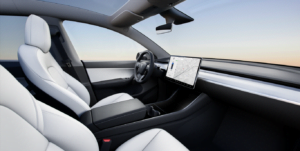 For most who have ordered a Tesla Model Y, it won’t be long now before deliveries start arriving. Many who ordered the new Model Y were concerned about the availability of certain customization options. When designing the Model Y on Tesla’s website, the white interior option is available, alongside the standard black interior.

However, the availability of alternative interior color and design represented a primary concern among customers who had already placed their Model Y orders. Other Model Y customizations, such as Performance and Long Range models should be delivered without any complications. In any case, it looks as though Tesla has sent some confirmations out to those who chose the white interior.

As one user shows in a short clip on Twitter, there were two Model Y SUVs boasting white interiors spotted on a carrier near LAX.

@Tesla Model Y on car carrier, 405 near LAX. Looks like the two on the top have white interior. @NYKChannel @vincent13031925. pic.twitter.com/f6SBPAz9Tc

The news comes as a welcome surprise to many who were beginning to wonder about the availability of interior designs on the Model Y. Of course, Tesla has begun sending confirmation texts and emails to some customers regarding the status of their deliveries. The electric vehicle manufacturer is set to begin delivering the Model Y in just a few days, on March 15, 2020.

Tesla’s Gigafactory Texas is reportedly aiming for 75,000 units of the Model Y in the first quarter of 2023, according to an unnamed source who shared the information with electrek. The figure equates to more than 5,000 units per week at the site for the entire quarter, marking a significant production increase from the 1,000 […]
Peter McGuthrie
10 hours ago