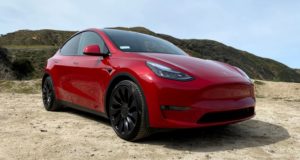 Anyone who’s involved in the world of electric vehicles knows just how much attention the new Tesla Model Y is receiving. From general consumer reviews to detailed video walkthroughs on the vehicle’s secret features there is no shortage of opinions on the vehicle. But when a world renowned automotive brand shares their thoughts, it’s a good idea to pay attention.

In a recent thread on Twitter, the “The global authority for unbiased, unvarnished automotive advice…” Edmunds informed the world that they bought a Tesla Model Y. What followed was a series of in depth reflections on the electric vehicle. Many of Edmunds’ insights are original in both conception and presentation.

So we bought a Tesla Model Y. Some first thoughts:

1/ Despite growing in height and weight, the Model Y retains the pleasing steering and handling attributes of the smaller Model 3. pic.twitter.com/0arcYIaf03

As you can see, the company began by discussing the steering advantages the Model Y holds over previous Tesla offerings. The thread continues with pictures of the back seat, cargo area, and exterior of the vehicle. Even though these are just the initial impressions offered by Edmunds, they closed the thread informing readers that a full review is coming soon.

With so much talk floating around about the Model Y, an endorsement from Edmunds adds to the excitement. Tesla appears to be performing well amidst the current coronavirus scare. Earlier in the week they reported their best ever first quarter performance in Q1 2020.

Tesla announced on Saturday it has achieved a new milestone, building 2,000 Model Y compact crossover SUVs in one week at its Gigafactory in Berlin, Germany. 2k Model Y built at Giga Berlin this week 🤘 pic.twitter.com/4u4I517wdV — Tesla (@Tesla) October 1, 2022 The milestone comes after Tesla announced it had produced 1,000 Model Y […]
Sarah Lee-Jones
2 days ago