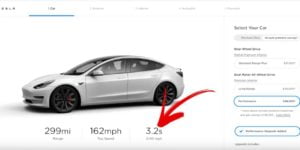 Now that the Tesla Model Y is out, we’re seeing a variety of video walk throughs and reviews showing off the pros and cons of the new electric vehicle. Some videos focus on the interior and exterior build. Others highlight the trunk space and Tesla Autopilot cameras. However, in a new video from the YouTube channel DÆrik, we get a look into the 0 – 60 mph performance from the Model Y.

There’s no denying that these figures are quite impressive. As an interesting side note, the vehicle runs these performance tests at 90% battery charge. The tire PSI in these tests is 40. The rest of the test runs measure similar times.

The video also shows that the speed demonstrated in the video is about 1.5 seconds faster than initially advertised by Tesla. The electric vehicle manufacturer issued similar figures for the Model 3. The company likes to release conservative estimates for the performance times of their vehicles.

Curious About the Tesla Model Y Trailer Hitch? Check Out This Video

Tutorial: How to Start and Drive Your Model Y