Curious About the Tesla Model Y Trailer Hitch? Check Out This Video 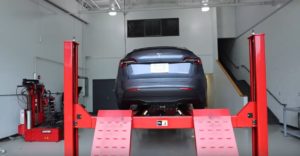 The Tesla Model Y has arrived. Although many of the vehicle’s basic features have been covered, some drivers are still wondering about some of the finer points. One such point is the issue of the Model Y’s trailer hitch. In a new video called “Tesla Model Y Trailer Hitch” from the extensive Tesla YouTube channel, i1Tesla, drivers can learn a bit more about what to expect regarding the vehicle’s trailer hitch.

As demonstrated in the Tesla Model Y Owner’s Manual, the new electric vehicle from Tesla is ambiguous on the inclusion of a trailer hitch. As the video shows, the Model Y’s trailer hitch was expected to rest under a panel on the backside of the car. Near the bumper, i1Tesla indicates an area thought to house the trailer hitch. However, upon further inspection, it’s clear the Model Y Performance model does not include a trailer hitch at this time.

The video does remind viewers that Tesla tends to release its vehicles with minimum features at first. They also tend to release more upgrades and features as they receive feedback from customers. As an SUV, it’s a little odd that the Model Y does not come with a trailer hitch.

However, there are various reasons that could explain the absence. For one, range is incredibly important for all of Tesla’s electric vehicles. Driving with a trailer can significantly reduce the vehicle’s range. The company also produced the vehicles ahead of schedule. We’ll see if Tesla adds a trailer hitch option for the Model Y in the future.