What’s Going on With Tulsa, Oklahoma and Tesla Memes? 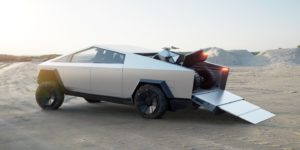 Tesla is on the lookout for the new site for its U.S. Cybertruck Gigafactory. CEO Elon Musk initially tweeted suggesting the factory would be located somewhere in the Central United States. Some cities and states are doing all they can to attract the electric vehicle manufacturer’s attention. But none of them have gone to quite the lengths that Tulsa, Oklahoma has.

A Twitter account called “Big F*cking Field” has emerged to produce memes intended to allure Tesla to consider the region for the site of its Cybertruck Gigafactory. Not only does the account tweet some appealing factual information regarding the viability of the location, but it also does so with some clever memes.

There’s no doubt that a sharp sense of humor is useful when attempting to capture the attention of Tesla’s CEO Elon Musk. However, the Tulsa location also shares some practical qualities that may make it quite habitable for Tesla’s factory. As the account points out, there’s also a fun similarity between the words “Tesla” and “Tulsa.”

As it stands, there is lots of support to suggest that Nashville is the likely location for the Cybertruck Gigafactory. However, at this stage, nothing is set in stone. There’s no doubt that Tulsa has the land and infrastructure needed to support the undertaking. As Tesla plans to produce the Cybertruck in 2021, it’s probable that they will choose a location in the near future.

China’s new-energy vehicle (NEV) sales dropped in the last week of November, as was measured by insurance registrations. BYD with its hybrid electric vehicles doubled Tesla’s sales to top NEV leaderboards in China during the fourth week of November, with BYD overseeing 38,480 insurance registrations while Tesla had 16,121, according to a report from CnEVPost. […]
Peter McGuthrie
13 hours ago

After Tesla stepping up its hiring efforts in Thailand earlier this year caused some to expect an upcoming launch in the country, the automaker has officially announced plans to start selling cars there. In a post on LinkedIn, Tesla shared a photo with text in Thai translating to “Hello Thailand,” and saying “See you December […]
Peter McGuthrie
14 hours ago