BMW Cancels the U.S. Launch of its iX3 Electric SUV 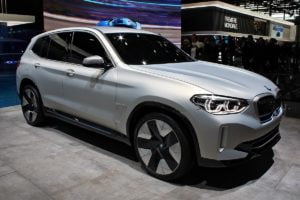 BMW recently announced that they will not be releasing the iX3 in the United States.

There has been lots of speculation surrounding the source of the decision. In their official statement, the company does not have plans to bring the vehicle to the US market. As most observers think, the demand for the BMW electric SUV in the US is shaky.

Of course, this disinterest could be due to a number of factors. It’s hard to not take the release of the Tesla Model Y SUV into account. For one thing, the Tesla Model Y boasts performance statistics that far outshine the BMW iX3. The difference in the two vehicles’ ranges and batteries provides perhaps the most glaring example. The BMW iX3 has a range of 204 miles [328 km]. This number is quite meager when compared to current Tesla models on the market. The Tesla Model S, for example, boasts a usable range of 390 miles [627 km]. The Model X has a range of 328 miles [527 km] as estimated by the EPA. Tesla even has plans to manufacturer Long Range versions of most of its vehicles, including the Model 3. Even the most standard of Tesla’s offerings far outshine the range estimates of the BMW iX3.