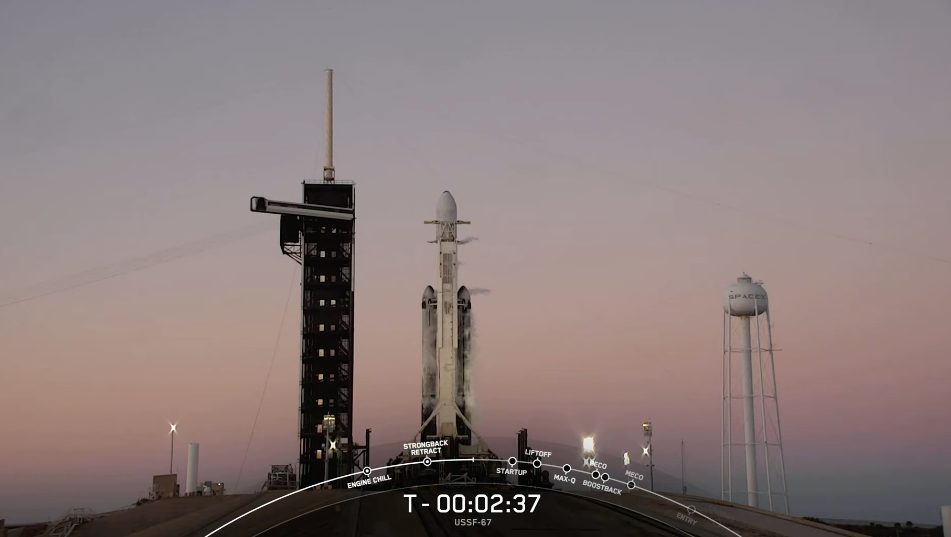 SpaceX’s Falcon Heavy launched the USSF-67 mission on Sunday, later sharing a sped-up tracking cam of the footage showing everything from launch to landing, dazzling viewers during golden hour.

The launch took place at the Kennedy Space Center in Florida at 5:56 pm ET on Sunday, marking the second launch for these particular side boosters after they supported USSF-44 in a previous mission.

Video of the launch shows dazzling visible shockwaves just before the side boosters landed simultaneously, with some incredible clouds bearing pink and purple hues as the sun was finished setting.

The third booster was expended as it was needed to carry the United States Space Force’s secret payload to orbit. The USSF is part of the U.S. Armed Forces, its space service branch. No footage was shared of the successful payload deploy in space.

You can see a 1080p preview of @Astronomy Live’s launch footage from Sunday’s Falcon Heavy launch in the post below, which shares some incredible footage of the side boosters separating and performing their ‘flip’ maneuver for their return back to Earth for landing.

Post-Launch Footage Preview of the USSF-67 Mission in 1080p on Twitter:

Here's a highly compressed 1080p preview of my footage. This is easily the best launch footage I have ever captured, stay tuned for the full launch to landing in 4K! Big thanks to @LCS_Big_Mike for running the focuser for me!@DJSnM @Erdayastronaut @spacestationguy @RedsRhetoric pic.twitter.com/S0mgVUGdq8

SpaceX also launched the Falcon Heavy Boosters for the first time since 2019 with the USSF-44 mission in October, also marking the company’s 50th launch in 2022.

The news comes just after CEO Elon Musk announced plans for SpaceX to build five full-stacks of its reusable Starship rocket in 2023, after a launch of the spacecraft has been delayed many times throughout the past few years.