Electric vehicle (EV) rebates are one way government bodies are trying to accelerate consumer electrification, and Canada’s rebate program has largely been dominated by Hyundai over the past few months.

Hyundai is leading Canada’s federal EV rebates through the first 11 months of this year, according to data reported by Automotive News Canada.

The Hyundai Kona and Ioniq 5 EVs brought the Korean automaker’s total of rebate-eligible deliveries up to 12,166 vehicles in the first 11 months of the year. In November alone, Hyundai had 891 qualifying deliveries of the two EVs.

Comparatively, Tesla’s Model 3 had just 44 qualifying deliveries in November, down from its 82 eligible units delivered in October. On the year as a whole, the Model 3 has had 10,937 eligible deliveries, before a price increase pushed the electric sedan out of the eligible price range for customers who ordered after November 23, 2021. 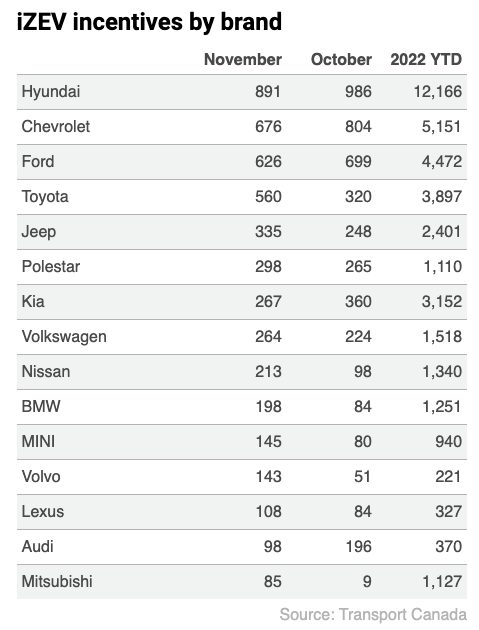 As a result, Tesla was left off the country’s top 10 incentive-receiving automakers in Canada for October and November — despite having fairly high qualifying deliveries year to date.

Still, the Tesla Model 3 was Canada’s best-selling EV across seven provinces as of October, despite no longer being eligible for the federal rebate.

Other notable automakers included Chevrolet with 5,151 qualifying deliveries year to date, and Ford (4,472), Toyota (3,897), Jeep (2,401) and Polestar (1,110). Of course, when it comes to federal EV rebates it also depends on whether automakers can produce enough EVs to meet customer demand. Hyundai is able to deliver more vehicles it seems to meet customer demand, but wait times are still far off due to supply chain shortages.

Hyundai plans to invest as much as 10.5 trillion won ($8.5 billion USD) in 2023 into research and development and its construction of an electric vehicle (EV) plant in Georgia, reports Bloomberg, as noted in a filing on Thursday. The news also comes after Hyundai began working on a $5.5 billion EV and battery factory […]
Peter McGuthrie
4 days ago

NVIDIA announced at the Consumer Electronics Show (CES) today its GeForce NOW cloud gaming service will be coming to cars from existing partners Hyundai Motor Group, BYD and Polestar, which are already using the company’s NVIDIA DRIVE ecosystem. “We are excited to offer our customers the best in technology, comfort, design from BYD and now the […]
Sarah Lee-Jones
4 weeks ago

After Hyundai announced plans to build an electric vehicle (EV) factory in the U.S. earlier this year, the automaker has officially begun working on the facility. Hyundai broke ground on its $5.54 billion EV and battery cell plant in Georgia on Tuesday, according to a report from Reuters. The investment represents the largest in Georgia’s […]
Peter McGuthrie
3 months ago