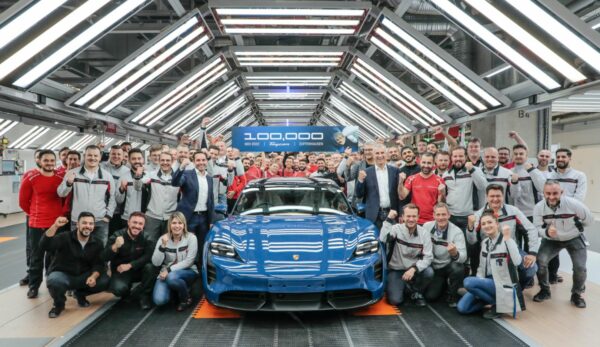 Porsche surpassed 100,000 Taycan electric vehicles (EVs) produced since it launched in 2019, as detailed in a press release shared by the automaker on Wednesday.

The 100,000th vehicle produced was a Neptune Blue Taycan Turbo S assembled at Porsche’s main Zuffenhausen, Germany plant, and it’s destined for delivery to a customer in the United Kingdom.

“We are very pleased to have reached this milestone in production history so quickly – despite the recent challenges posed by the semiconductor shortage and the volatile Covid situation,” said Vice President of the Taycan Model Line, Kevin Giek. “With the Taycan, we have made a decidedly successful start in the electric age.”

Currently, the largest three markets for the Porsche Taycan are the U.S., China and the UK/Ireland. Porsche offers the vehicle in three different body styles: the base-level Taycan sports sedan, the Taycan Cross Turismo and the Taycan Sport Turismo.

In August, the Porsche Taycan Turbo S set a new lap record for electric vehicles (EVs) at the Nürburgring Racetrack with driver Lars Kern behind the wheel.

The Taycan has been spotted in drag races with the Tesla Model S Plaid, both debuting the impressive acceleration and speeds EVs can reach amidst a larger transition away from internal combustion engines (ICEs).

Lutz Meschke, Chief Financial Officer at Porsche, believes electric vehicles (EVs) have the potential to be more profitable for the luxury automaker than gas-powered cars — reports Automotive News. Meschke said during Porsche’s capital markets day earlier this week that the company’s EV margins will reach the same level as those of its combustion engine-powered […]
Nehal Malik
4 months ago