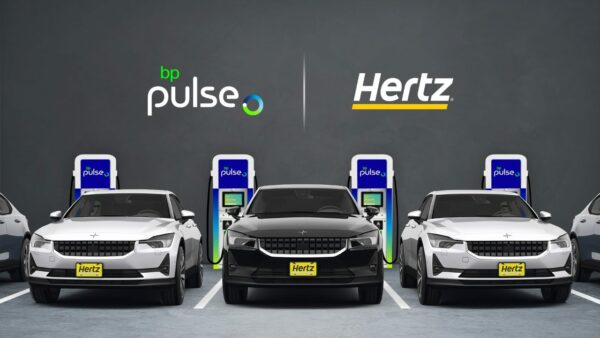 Electric vehicles (EV) are becoming popular rental cars through Hertz following partnerships announced last year, and another joint goal will see the advancement of charging stations in the U.S.

Hertz announced a partnership with British Petroleum (bp) on a national network of EV charging stations, as detailed in a press release on Tuesday from the rental car company. The plans will oversee bp pulse installing charging stations at 25 Hertz locations this year.

“Hertz is accelerating the adoption of electrification by investing in the largest rental fleet of electric vehicles in North America and expanding the availability of charging stations,” said Hertz CEO Stephen Scherr. “We are excited to partner with bp pulse to create a national charging infrastructure for the Hertz EV fleet, thereby growing the number of charging options available to our customers and providing them with a premium electric experience and lower emission travel options.”

Hertz has purchased EVs from Tesla, Polestar and GM for a fleet of tens of thousands of EVs, available at 500 Hertz locations across 38 states.

“It’s brilliant to be joining forces with Hertz – quite simply, they are one of the biggest names on the road,” said bp CEO Bernard Looney “Working together to deliver charging facilities and design solutions, we believe we can take the EV driving experience to the next level for US customers. And this is just the start for bp pulse in the United States.”

Comma AI President George Hotz said he plans to take time away from the company, and seems to be stepping away to a different venture, as seen in a letter posted on Github over the weekend (via @Chuck Cook). In the letter, Hotz said he hopes to move away from the open-source, automated driving project […]
Peter McGuthrie
4 weeks ago