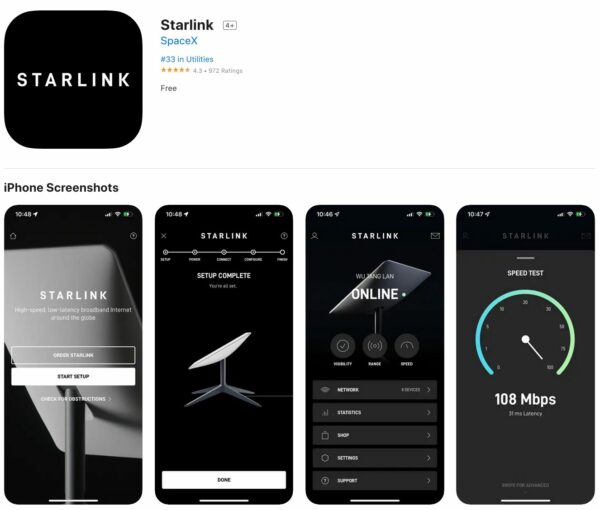 Starlink’s satellite internet service is expanding rapidly across the globe, and a new report shows that the mobile app is becoming more popular as its subscriber-base grows.

SpaceX’s Starlink mobile app has made it into the top 100 downloaded apps in the Apple iPhone’s App Store for the first time, as reported by PC Mag on Thursday.

The Starlink app ended the day on Wednesday as the App Store’s 54th most downloaded iPhone app in the U.S., though it has since dropped to 96th.

Still, the accomplishment is an indicator of just how many people are beginning to use Starlink in the U.S., even as SpaceX continues to roll the service out worldwide.

“As for why it broke into the top 100 rankings yesterday on the iOS store, we can only speculate,” says analyst Stephanie Chan from SensorTower, which is the firm that made the initial discovery. “It’s possible that because Starlink has been in the news lately (e.g. adding more satellites to its network, seeking exemptions so that they can service Iran) that it has helped raise awareness or bolster curiosity about it.”

The Starlink app is free to download and allows customers to setup and manage their satellite internet system. SpaceX has 700,000 Starlink customers and another 700,000 on a waitlist, according to data shared with Le Monde last month.

A new Starlink dish just dropped, this time featuring a wider range of weather capabilities for use in harsh marine conditions. SpaceX released a new Starlink dish for marine customers this week, featuring an overall flatter design and a much higher wind resistance, as can be seen on the company’s website (via @Sawyer Merritt). The […]
Peter McGuthrie
15 hours ago