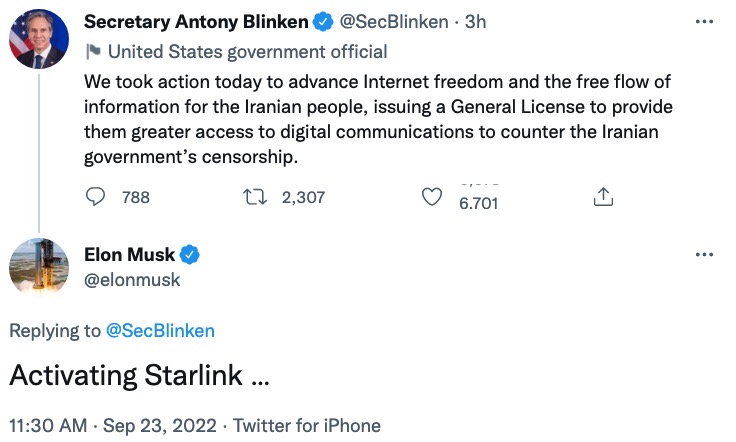 Secretary of State Antony Blinken announced on Friday the White House “took action today to advance Internet freedom and the free flow of information for the Iranian people, issuing a General License to provide them greater access to digital communications to counter the Iranian government’s censorship.”

Starlink internet requires a portable satellite dish and can be activated from any continent on Earth. SpaceX assisted Ukraine by providing thousands of Starlink dishes to counter the invasion from Russia, that cut off communications.

Nationwide protests have erupted in Iran, after a 22-year old Kurdish woman, Mahsa Amini died in police custody, for allegedly failing to comply with the country’s hijab rules. In response, the Iranian government has cut off internet access to apps such as WhatsApp and Instagram. With Starlink, Iranians will be able to go online and bypass government internet cut offs.

Earlier this month, Musk said “Starlink will ask for an exemption to Iranian sanctions in this regard,” to offer satellite internet in Iran.

Japanese new outlet TV Tokyo Biz shared a video of a drone on Thursday, delivering crucial emergency supplies to remote, snowy areas of Chichibu with the operator of the drone connected to SpaceX’s Starlink (via Reddit). The news comes after the Chichibu area was affected by a landslide this week, causing nearby roads to become impassable. […]
Peter McGuthrie
8 hours ago