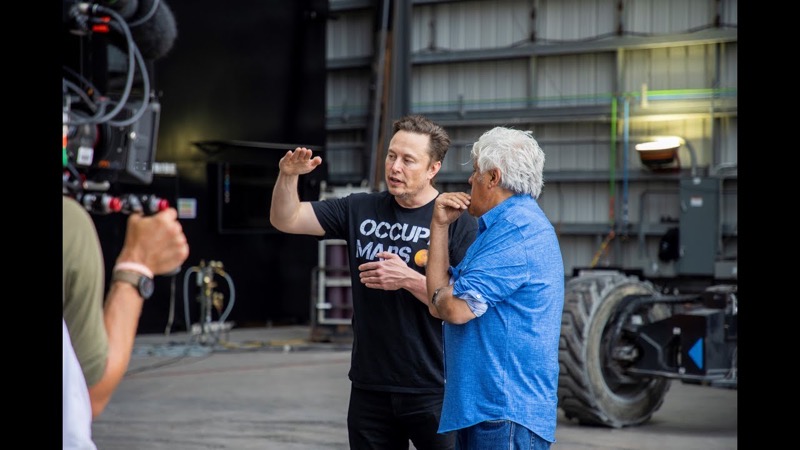 Tesla and SpaceX CEO Elon Musk will be a guest on Jay Leno’s Garage, set for Wednesday, September 21, 2022, to add to the recent launch of the seventh season of the show that’s on CNBC.

Musk gave Leno an exclusive tour of SpaceX’s Starbase at Boca Chica, Texas. “I am a huge believer in innovation,” said Leno last month, teasing the future episode. “This season I went down to Starbase in Texas to talk with the only person to send an actual car into outer space, Elon Musk.”

A teaser was shared on Thursday, showing Leno touring Starbase with Musk and looking at Raptor engines.

“Is that something you patent?” asked Leno? “No,” replied Musk, adding, “we don’t really patent things. Patents are for the weak.”

Leno laughs and says, “there you go!”. Musk explains further, “patents are used as a blocking technique. They’re like using landmines in warfare. They don’t actually help advance things. They just stop others from following you. Most patents are [bullshit].”

This looks like an episode you’ll want to watch. Check the teaser clip below:

"Patents are for the weak" – @elonmusk

Check out more SpaceX and Elon next Wednesday 9/21 at 10 PM ET on CNBC! pic.twitter.com/c2QIDrkcEt

In the past, Musk has also spoken many times with Leno, even giving him a first ride in the Cybertruck in 2020.