Tesla CEO Elon Musk said on Thursday the company has held talks with Apple for SpaceX Starlink connectivity for the iPhone.

Just yesterday, Apple announced its new iPhone 14 lineup will support Emergency SOS with satellite, a feature that allows for communications when no cell signals or Wi-Fi is available. Apple is partnering with Globalstar for the service.

Essentially, an iPhone 14 or iPhone 14 Pro just needs to point towards a Globalstar satellite in the sky and then pre-populated communications will be possible. Apple says it wrote software to ensure messages sent would be timely, given the low bandwidth of the service. Messages will be sent in about 15 seconds when a clear view of the sky is available, said Apple.

On Thursday, Musk replied to a tweet about SpaceX partnering with Apple. Musk replied, “we’ve had some promising conversations with Apple about Starlink connectivity,” adding “iPhone team is [obviously] super smart.” 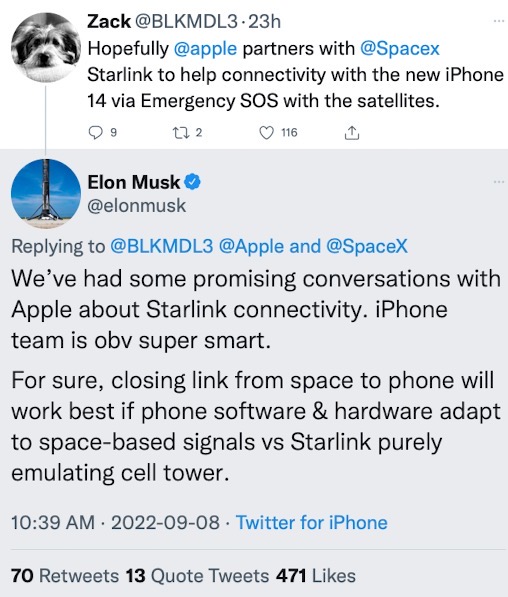 Musk then said, “for sure, closing link from space to phone will work best if phone software & hardware adapt to space-based signals vs Starlink purely emulating cell tower.”

Last month, T-Mobile and SpaceX announced a partnership that would leverage Starlink for cellphone connectivity, essentially offering cellphone service around the globe, leveraging the constellation of Starlink satellites in the sky.

But this service will only debut when SpaceX launches its Starlink V2 satellites in 2023, which are set to leverage the company’s latest Starship rocket, which has yet to see its first orbital launch (expected soon).

“Text messaging, including SMS, MMS and participating messaging apps, will empower customers to stay connected and share experiences nearly everywhere. Afterwards, the companies plan to pursue the addition of voice and data coverage,” explain both SpaceX and T-Mobile in a press release in August.