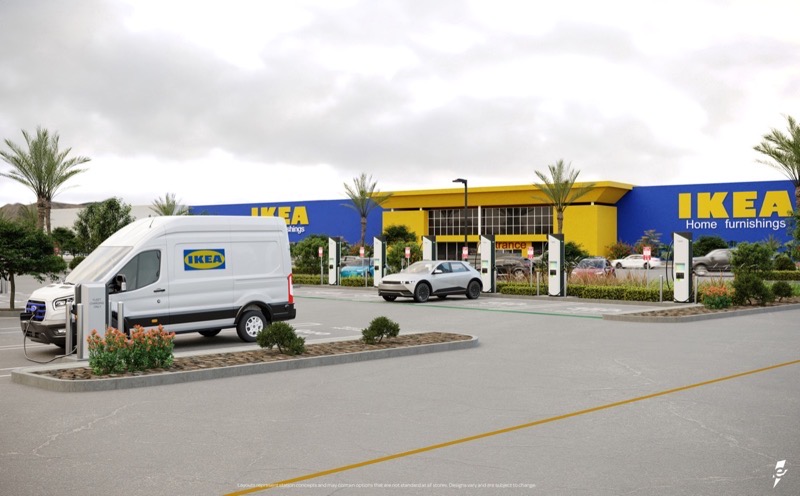 According to IKEA, this new partnership will allow the retailer to quadruple total EV chargers at its stores in the U.S.

“At IKEA, we believe that we must work together with our partners to tackle climate change and create solutions for a greener future. This collaboration with Electrify America will not only bring ultra-fast public chargers to our stores for the first time but it will also help us take a big leap as we work towards our targets to become circular and climate positive,” said Javier Quiñones, CEO & Chief Sustainability Officer, IKEA U.S., in a statement. “We look forward to continuing to innovate around new ways we can make our everyday lives more sustainable.”

The first locations with these Electrify America chargers are expected to open in late 2022 and be completed by the end of 2023.

“We are excited to establish both public and commercial fleet charging stations with IKEA – a brand that shares our goal of a more sustainable future,” said Giovanni Palazzo, president and CEO of Electrify America, in a statement. “Through this collaboration, Electrify America, Electrify Commercial and IKEA U.S. are leading a path forward for customers and businesses toward zero-emission transportation.”

Earlier this month, Tesla North reported Elon Musk’s company will be installing one of the first Superchargers at an IKEA in North America, in Portland, Oregon. At the time, the permit also showed an Electrify America station was planned for the site.

Another state is targeting a major shift to electric vehicles (EVs) by the mid-2030s, following California’s mandate on going emission-free. New York Governor Kathy Hochul (D) said on Thursday that the state will need to shift to selling only zero-emission vehicles by 2035, as reported by The Hill. “We’re really putting our foot down on […]
Peter McGuthrie
42 mins ago