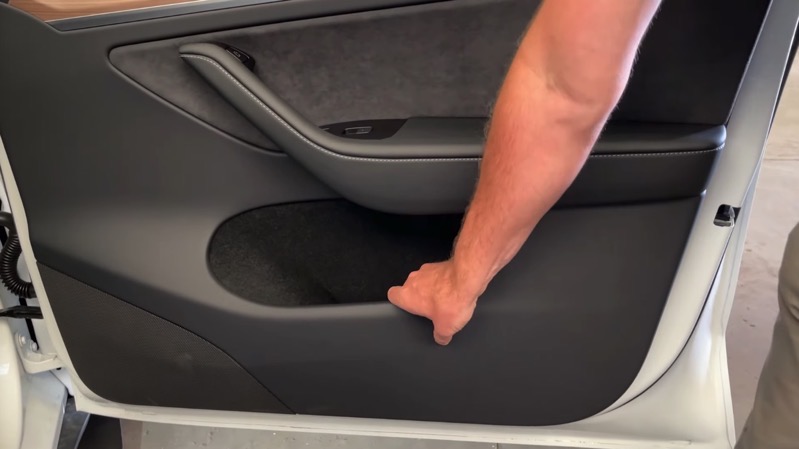 A new video from RSymons RSEV details the differences between the Giga Berlin-made Tesla Model Y Performance, compared to the channel’s Model Y Long Range made at Giga Shanghai.

To start, RSEV says the Berlin Model Y apparently has some revised speakers at the front bar, noting only mid-range speakers are there now and tweeters are notably absent, resulting in just tweeters along the interior by the side mirrors. Also new are apparently different amplifiers, resulting in “better sound” versus Shanghai-made Model Y Long Range, which are supposed to have the same speaker setup.

When it comes to the front seats, the channel says side bolsters appear to have improved, while the glove box now also opens slower and softer than before.

In the front and back door sides, the hard plastics are now replaced with a softer touch material, while the door pockets are now lined with a fleece-like material (we saw this before already).

The channel says the rear seats feel tighter fitting, while the sides also have carpeted sides by the seat belts.

In the rear trunk, the Berlin Model Y also has a parcel shelf. We also see the trunk sides again also are now carpeted. The channel says the trunk struts close quieter and are smoother.

After taking the Model Y Performance from Giga Berlin on a short test drive on a grassy field, the channel noticed it felt more comfortable and less jarring versus their Model Y Long Range made at Giga Shanghai.

The owner of the Model Y Performance said when driving and doing hard cornering, the stock front mud flaps are able to scrape along the road, indicating a slightly softer suspension.

Again, testing the softness of suspension can be subjective, so it’s hard to make a firm conclusion on these differences. If you have Berlin-made or Shanghai-made Model Y Performance, are you seeing a slightly softer ride versus your previous Teslas owned?

Tesla has changed its estimated delivery times on all models in China, with the order configurator page now saying all Model 3 and Y trims will be delivered in “December 2022” (via @Tslachan). Previously, each trim and model displayed one to five weeks for estimated delivery. The change comes as Tesla seemingly pivots to focus […]
Peter McGuthrie
10 hours ago

The Tesla Model Y earned the title of News AU‘s 2022 Car of the Year, following testing of eight different gas and electric vehicles on Australian roads. The outlet notes the Model Y’s 450km driving range, its roomy cabin compared to gas cars, its brisk acceleration and its sharp steering as a few of the […]
Peter McGuthrie
11 hours ago