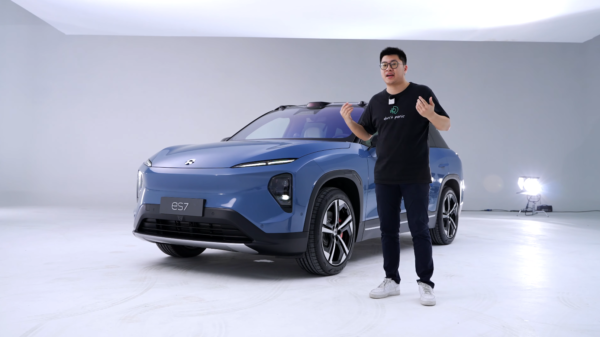 NIO launched its ES7 electric SUV this week with autonomous driving features being one of the vehicle’s main focuses, and the first video we’ve come across taking a closer look at the electric vehicle (EV) has also arrived.

42HOW shared a first look at the new NIO ES7 electric SUV on Thursday, a video taken of the vehicle at the automaker’s Hefei, Anhui headquarters.

In the video, the host goes through many of the EV’s features, including its exterior shape lowering the drag coefficient from NIO’s previous SUV. He also notes the vehicle’s LiDAR sensors, tail lights and trunk, as well as the overall size of the body.

The host also goes through the interior of the car, showing off the amount of legroom, and showing the luxury-style driving cockpit in addition to a large touchscreen in the center of the dashboard.

The video also brings up the NIO ES7’s impressively quick 100 km/h acceleration time of just 3.9 seconds, which the host says may not even be all of what the EV is capable of.

NIO announced earlier this week plans to create a mass-produced sub-brand with an annual production capacity of 500,000 units, in order to rival Tesla’s Model 3 and Y units.

You can see 42HOW’s first full look at NIO’s ES7 SUV below.