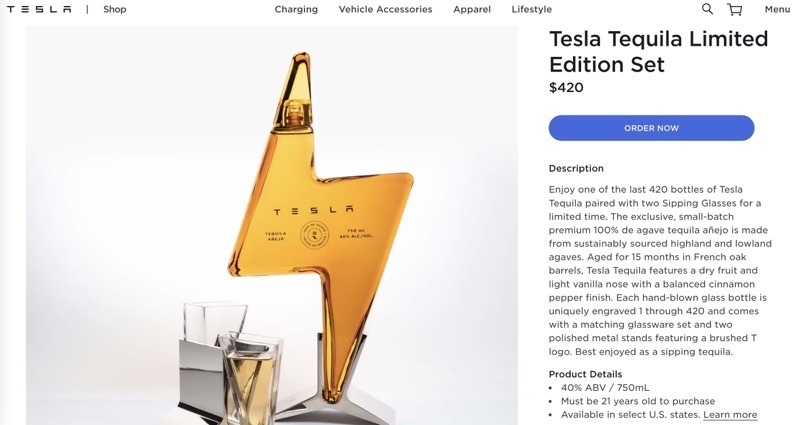 Tesla has launched a new limited edition of Tesla Tequila, that comes with two Sipping Glasses for $420 USD.

“Enjoy one of the last 420 bottles of Tesla Tequila paired with two Sipping Glasses for a limited time. The exclusive, small-batch premium 100% de agave tequila añejo is made from sustainably sourced highland and lowland agaves. Aged for 15 months in French oak barrels, Tesla Tequila features a dry fruit and light vanilla nose with a balanced cinnamon pepper finish. Each hand-blown glass bottle is uniquely engraved 1 through 420 and comes with a matching glassware set and two polished metal stands featuring a brushed T logo. Best enjoyed as a sipping tequila,” says the description.

Click here to buy it from the Tesla online shop, as it’s likely to sell out very quickly.

Electric vehicles (EVs) are becoming more popular in Europe with each passing quarter, and a new milestone has been reached with one of Tesla’s EVs at the forefront. The Tesla Model Y led Europe’s EV sales year to date through August, with 7,011 units of the electric SUV sold in the month, according to CleanTechnica. […]
Peter McGuthrie
27 seconds ago

According to Bloomberg’s Ed Hammond, Elon Musk has apparently decided to proceed with his deal to buy Twitter at $54.20 per share. The news halted trading of Twitter’s shares on the stock market. Scoop – N*MUSK SAID TO PROPOSE TO TWITTER TO PROCEED W/ DEAL AT $54.20 — ed hammond (@EdHammondNY) October 4, 2022 Twitter […]
Sarah Lee-Jones
11 mins ago

After Tesla’s shares dropped following fewer deliveries than expected, but one investing firm saw the moment as an opportunity. Cathie Wood’s investing firm Ark has purchased more Tesla shares across multiple branches, as detailed in a report from Barron’s. The purchase came after Tesla’s stock dropped despite its record deliveries in Q3, that missed Wall […]
Peter McGuthrie
28 mins ago