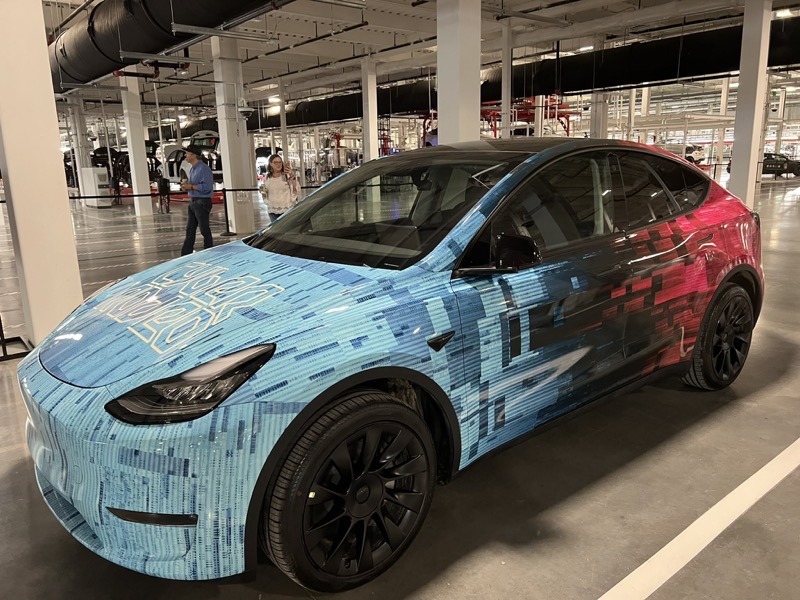 Tesla kicked off deliveries of Texas-made Model Y vehicles at its Cyber Rodeo event last week, with the first confirmed to include new 4680 battery cells, as we previously reported.

At the Giga Texas factory was also a Model Y on display that was discovered to be a ‘Standard’ Dual Motor version of the car, with a 279 mile range, seemingly corroborating what was previously disclosed in an EPA filing.

This information comes from Reddit, in a thread where a user by the name of ‘SqueakyNinja7’ claims Model Y ‘Standard’ AWD pricing will be at $59,990 USD. A reply by DMC_Ryan, or Ryan McCaffrey, the executive editor of publication IGN, and host of the unofficial Tesla podcast, ‘Ride the Lightning’, said “I can confirm this as I’ve seen the employee documentation.”

‘SqueakyNinja7’ goes on to add, “it’s semi public knowledge now. All Tesla employees were made aware via internal email and told they can share that information.” The apparent email was sent out on Friday, April 8.

As for the timing of when Tesla would launch a Model Y ‘Standard’ AWD? If true, it could debut on or after Tesla’s upcoming Q1 earnings call, slated for April 20, 2022.

Tesla may be trying to push customers to spend extra on the Model Y Long Range, as the price difference is not exactly that significant. The rumoured Model Y ‘Standard’ pricing also would mean it’s $4,000 USD more than an entry Model 3 Long Range.

Recent price surges in EV battery commodities such as lithium, plus other supply chain bottlenecks, have caused electric automakers including Tesla and others like NIO to increase prices.

“Looky what I found, a Made-in-Texas @Tesla Model Y Standard Range lat the Cedar Park Supercharger. It was no longer charging so I assume it had been there for awhile, maybe a day or more. My first impression was that the build quality was pretty darn good!”, said Burkland, following up with numerous photos of the vehicle’s exterior and underbody.

Looky what I found, a Made-in-Texas @Tesla Model Y Standard Range lat the Cedar Park Supercharger 👀. It was no longer charging so I assume it had been there for awhile, maybe a day or more. My first impression was that the build quality was pretty darn good! pic.twitter.com/P0d3ZfxbSG

On the weekend, it was reported Tesla’s website code indicated it was preparing to launch online sales of a new Model Y ‘Standard’ AWD, to note it would include 279 miles of range, a top speed of 135 mph, and 0-60 mph in 5 seconds.

For now, it appears all signs point to the Model Y ‘Standard’ AWD launching soon, so stay tuned for final pricing confirmation, if and when it does go live soon.

Lincoln Teases EV Concept Coming in April, and It Looks Like an SUV